* Update 10/18/10: Looks like they finally got around to bootlegging some of the other designs in the first series. I’ve seen some photos and the paint jobs are pretty lousy. These bootlegs are untested, badly painted and of dubious quality. If it seems too good to be true, it probably is. *

Flattering as it may be, some suppliers in China have taken to counterfeiting the Android mini collectibles and passing them off as the real thing to unwitting collectors, a few shops have even picked up the fakes and are redistributing them. But isn’t the Android creative commons you may ask? The original 2D character design is, but the toy designs and packaging that I spent months and thousands of dollars developing, not so much. Also the actual ANDROID logo text that appears on the box and back of the figure is trademarked property of Google, Inc and is not supposed to be used without permission.

Here is a quick guide to spotting some of the fakes that may pop up on eBay or other sites ( also know as a guide to making better fake Androids, but let’s hope that it does more good than harm! ).

First up, almost all the fakes are either “Standard Green” or “Albino”, simply because these are the two simplest versions to copy. It takes some time/money/effort/skill to replicate the complex paint applications found in Series 1 designs, so the fake factories don’t bother. 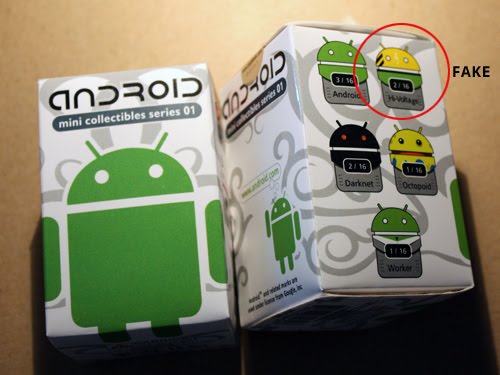 The packaging on the fakes varies from simple to pretty close to the original. All of the fakes I’ve seen are based off of the smaller boxes from the first run of Series 1, so if yours came inone of the newer, taller boxes you’re probably good!

The fake box above is mostly accurate, except that the colors are all too dark and there is this glaring error, the real Hi-Voltage edition has no green in it. 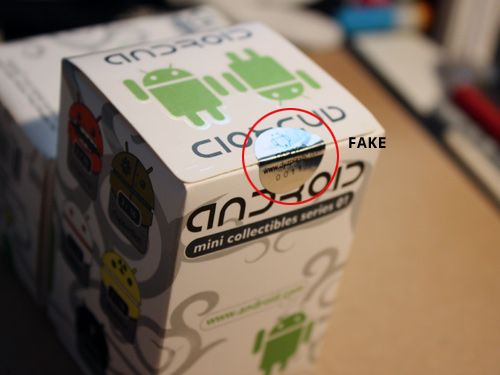 Ironically some of the fake Androids come with “authenticity seals”, this one even has my URL on it and a unique number! There are no such seals on the authentic boxes. 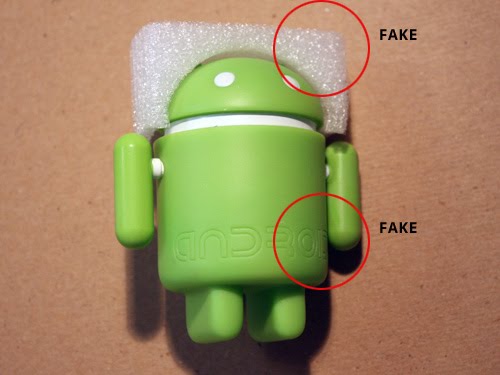 Another obvious tell is that the fakes are usually packed with the “Android” logo facing front. On the real figures, the Android logo is on the back. Here we also see white foam used to protect the antennae on the fake edition.The real first editions of the figures are in plain foil bags with no foam, while the updated second shipment are in printed foil bags with a black foam square on top. 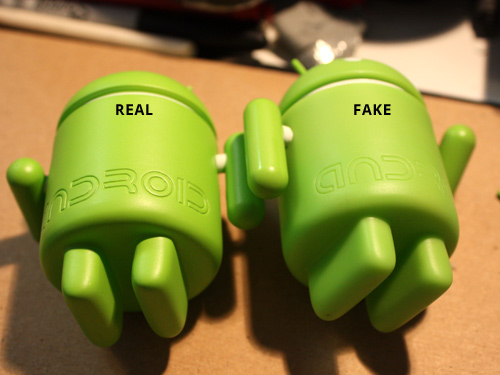 The real Android minis are painted green, it has a nice solid rich matte finish. Most of the fakes I’ve seen are molded directly in green plastic. The logo on the back is also much less pronounced. 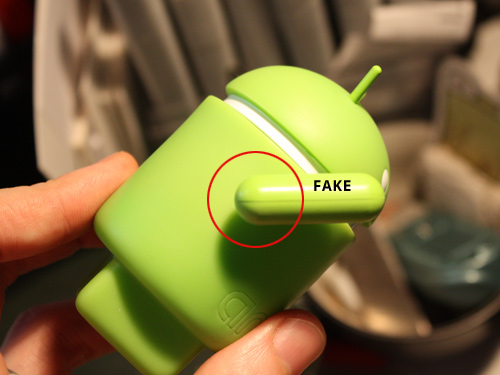 While the real Android figures also have a seam along the arm, it is much more obvious on the fake ones. The arms on the fake ones are also often glossy, not matching the rest of the body. The fake antenna are also longer and more fragile than the real ones. 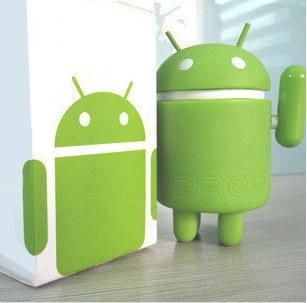 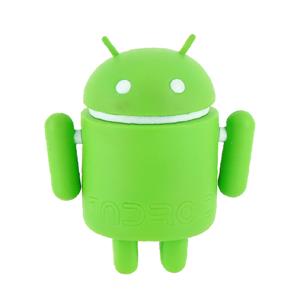 Here is a product shot from a US company that is re-selling fake editions. You can see the fake box, forward facing logo, shiny arms and overly-long antenna. I’ve gotten a few e-mails from customers who were quite annoyed with the shoddy fakes and unable to secure refunds. 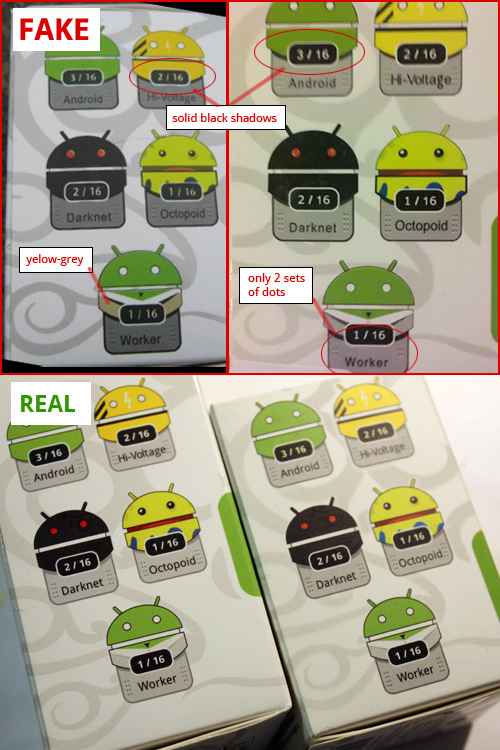 You can see in the above photo of more recent fakes. The hi-voltage is right but the “Worker” is yellowed on one and missing dots next to the word “Worker” on another, there should be four rows of each like the others. Also, the shadows under the icons are black, where they should be grey.

I realize some of you may not care because you just have to have your Android fix, this article obviously isn’t for you. However I know there are a lot of great people out there would rather support a small business and independent artist; people who don’t want to throw money away on an inferior knock-off product. Thanks for your support and hopefully this will help you avoid getting scammed. Remember that more Androids are coming to more stores near you!

Thanks again for your support,