Quick thanks to Clutter Magazine and the board voters for the Designer Toy Award! A post about that coming up tonight or tomorrow!  Speaking of tomorrow.. 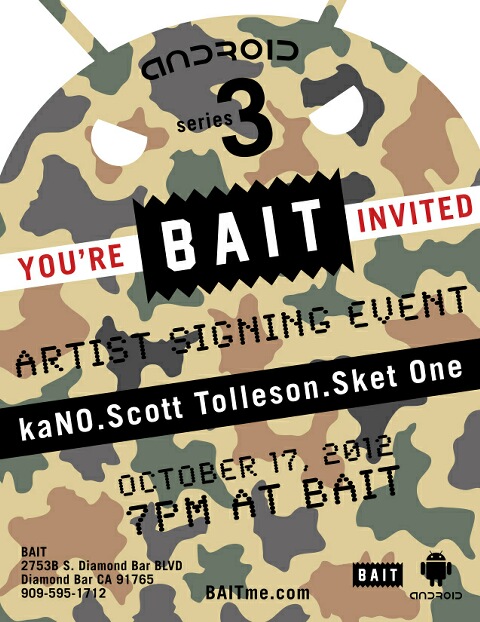 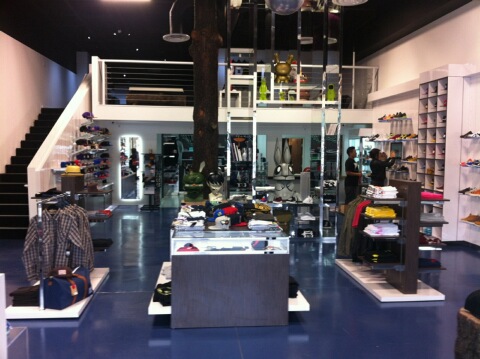 The shop looks great! Swing by and say hey to the crew if you get a chance! 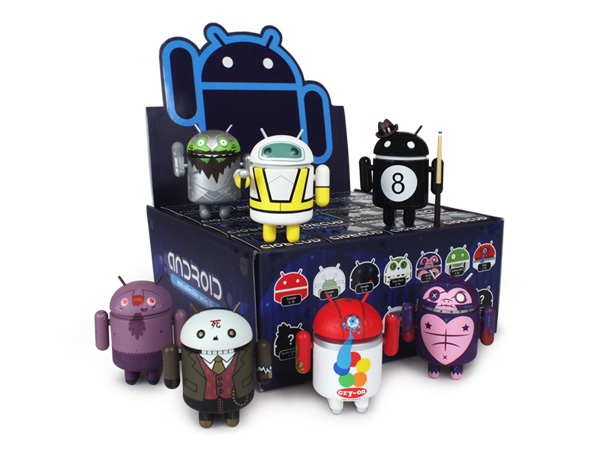 Hooray! We’re finally taking orders in the official Dead Zebra Inc shop! Orders will start shipping later this week. They’re available now There will be more at around 11pm EDT and if we sell through those don’t panic because there will still be plenty of options from our retail partners! 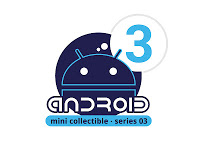 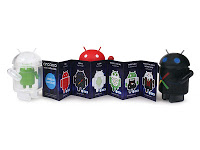 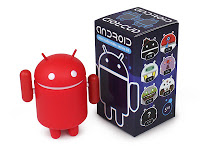 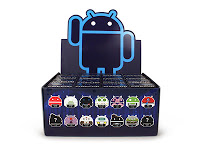 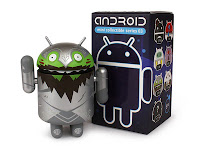 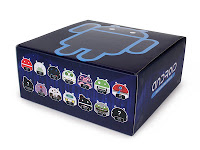 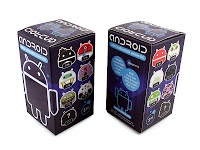 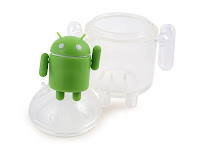 Thanks to all the fans for the continued support (and patience!), I know you’re going to love this series! 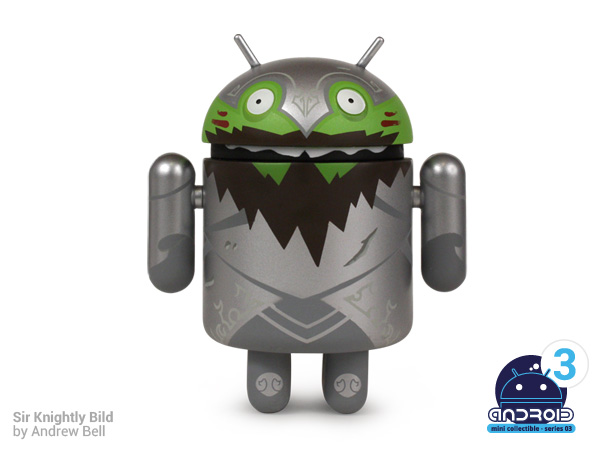 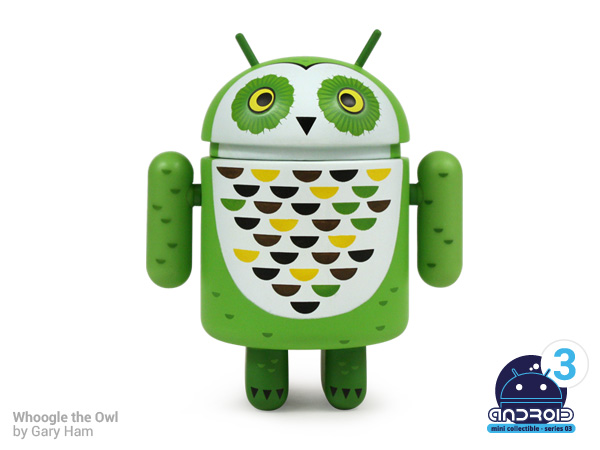 God of the wild, god of goats, nature protector.. kick-ass flautist? From the sparkly purple brainmeats of artist Kelly Denato comes Pandroid! Ready to rock out with his tiny pan flute accessory, this Android has a 1/16 ratio. 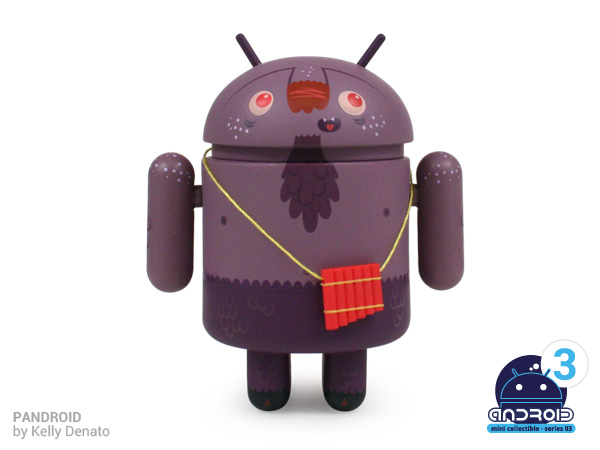 You thought your teachers were tough? This one is mostly metal! Well, ok it’s still technically vinyl, but don’t tell the good Professor Skully McRivethead that. Artist Huck Gee brings his distinct touch to Android with this awesome design, 1/16 ratio. 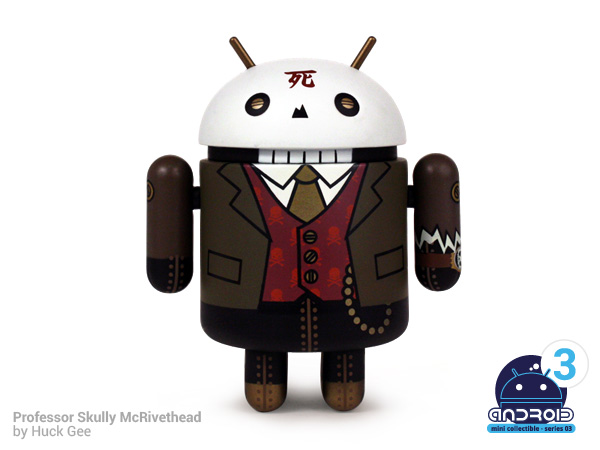 Bonus! Click and drag on the image below to see a 360 view (requires javascript). Not working in your browser? Try this direct link.
Also for you Android Foundry fans, we tallied the votes and the new Bubble Bot rug is now available in the Dead Zebra shop!

Clearly something is special about this Android.. Pop off his head and you have yourself a micro Android! 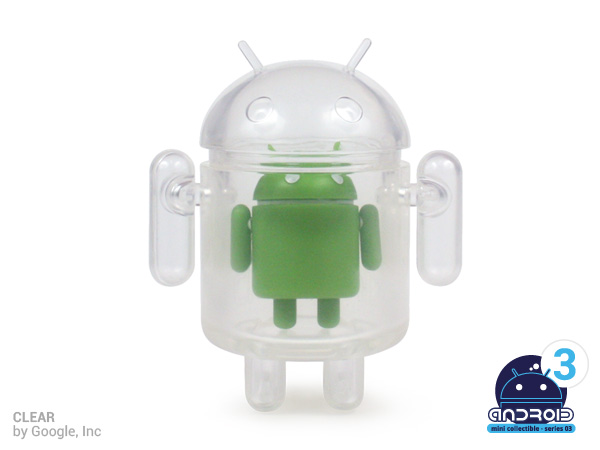 This little guy has a built-in keychain attachment and features an articulated head and arms, and legs that move enough to let him sit up unaided. 2 for 1, can’t go wrong! 1/16 ratio. 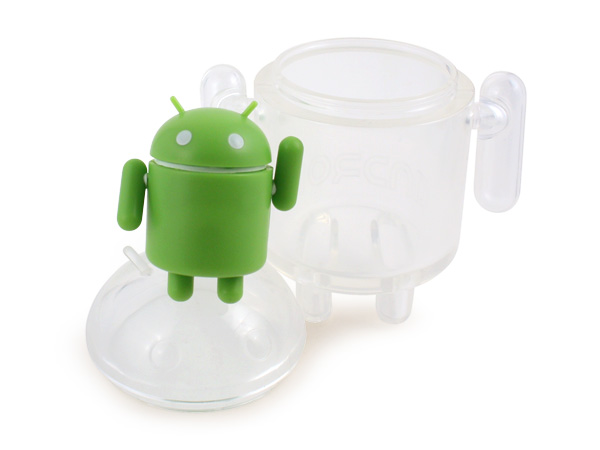 Continuing the solid color tradition, series 03 ha us seeing a very specific shade of red! Are you sensing a color pattern yet? Hmmmm.. Red comes in a 2/16 ratio. 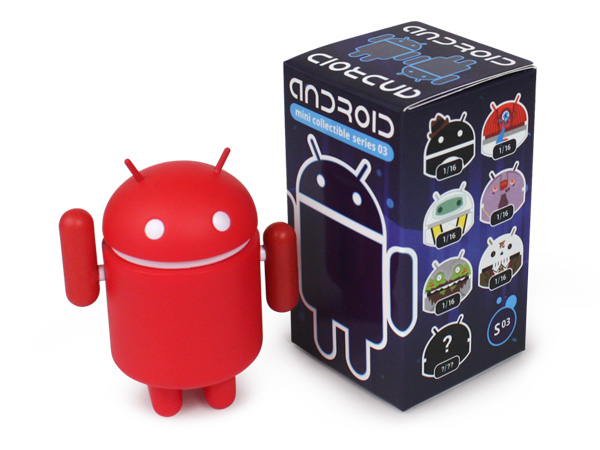 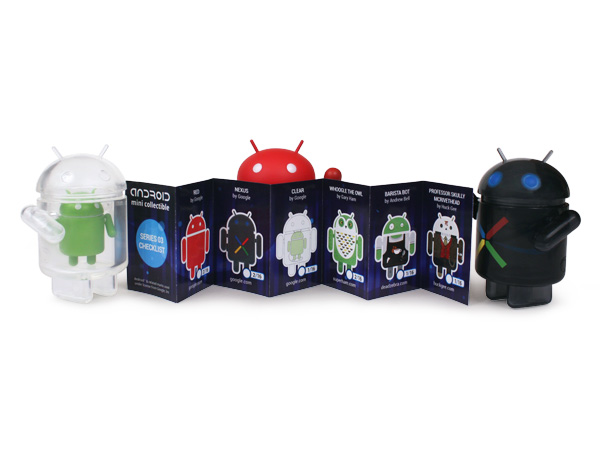 Wondering about buying these guys? They’ll be available on the Dead Zebra shop (along with a few surprises) starting Monday 9/24 at 11am EDT for shipments starting on 9/26.
Additionally they should start popping up in toy, collectible, comic and specialty Android retailer locations and websites within the next few days, including many on this list! Also available through many of our Asia retailers starting on the 24th.
Artist kaNO put together this awesome Beastie Boys / Japanese construction inspired design long before the recent tragic loss of MCA. I’m glad it made it into the series as I think it serves as a fun tribute to the late great intergalactic rap superstar! Armed with a mic accessory, ready to let the beat drop with a 1/16 ratio. 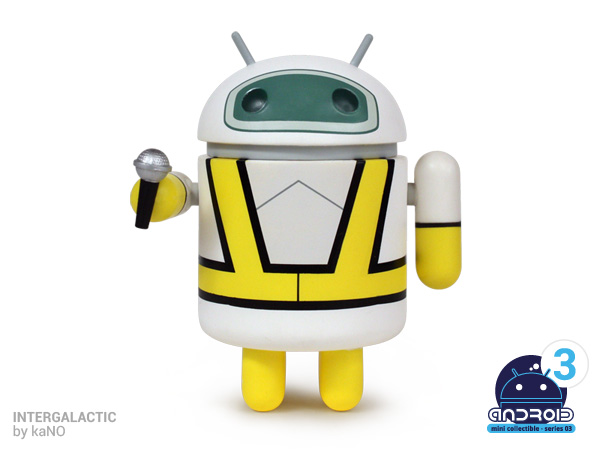 If you ask for a “venti mocha blaster”, or a “frappa caramel whatsit”, this Android will kick you out of the cafe before you can even finish your obnoxious branding babble order. Stop talking made up nonsense, here’s your espresso. Drink it within 15 seconds and move along. 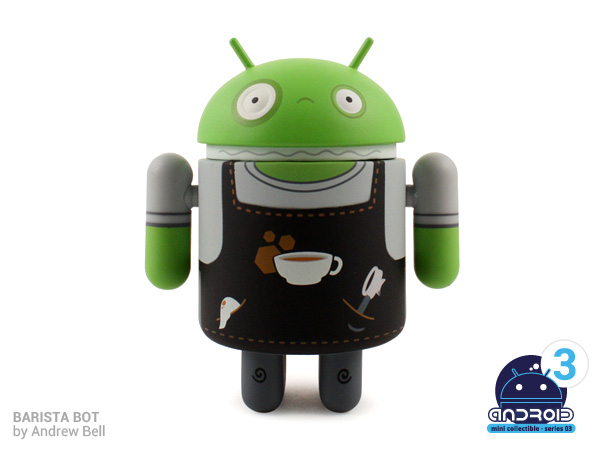 When my sister opened Cafe Grumpy here in Brooklyn 7 years ago I helped her out by designing the logo.. and then somehow I was drafted into serving a brief stint as a barista. I never drank much coffee before that, so by the end of the day I looked pretty much like this guy. 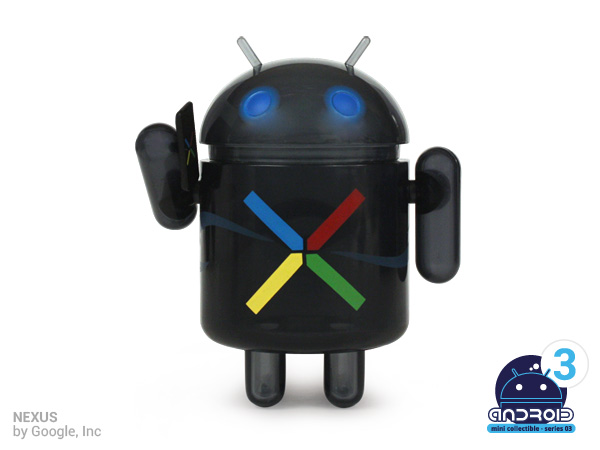 Set him up near a light source for maximum effect! 2/16 ratio.
*note: phone specs may be slightly exaggerated, phone is a small piece of solid plastic.

This is what happens when you test cosmetics on live animals.. escaped killer apes with blood on their hands. You’ve been warned! 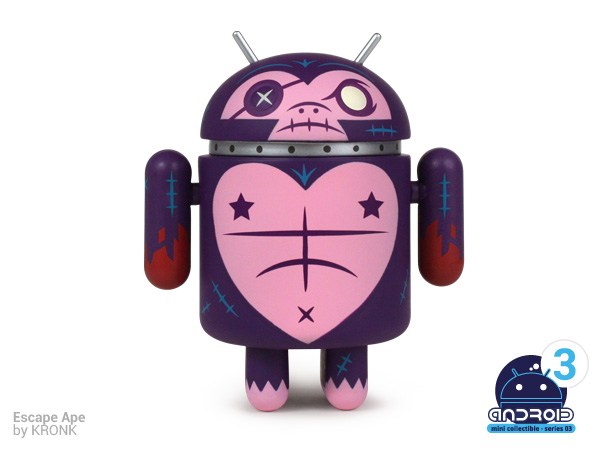 Escape Ape is one of two killer Series 03 designs by South African artist and toy designer KRONK. This one has a 1/16 ratio, the other one.. well, that’ll be a bit harder to find.

Bonus! Click and drag on the image below to see a 360 view (requires javascript). Not working in your browser? Try this direct link. iframes/javascript must be enabled to view this content.

Series 3 is almost upon us! Hooray! Our shipment is arriving on the sunny shores of California today and should be hitting retailers in a week or two after we clear customs and truck it over to the distribution center! 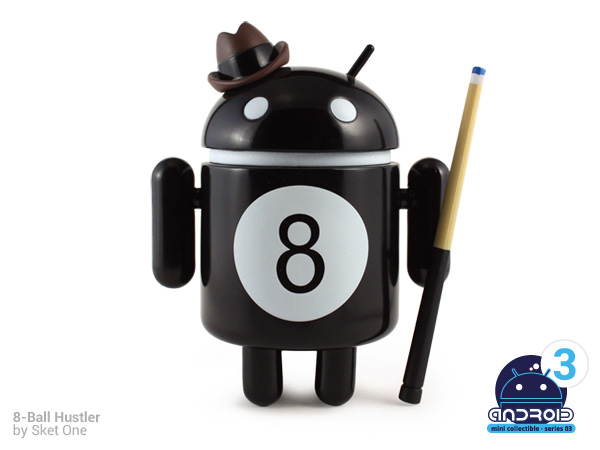 Bonus! Click and drag on the image below to see a 360 view (requires javascript).
Not working in your browser? Try this direct link. iframes/javascript must be enabled to view this content.

As you know we had hoped to release Series 3 end of Q2 this year (late June).. obviously that has come and gone! Unfortunately we got a little over 2 months behind on our production schedule.The good news is that we are basically done and will be releasing by the end of Q3. I’ll let you know when they are en route, and maybe I’ll even post the boat information so we can interactively track their journey across the ocean! 🙂
…Now for some excuses exciting information! 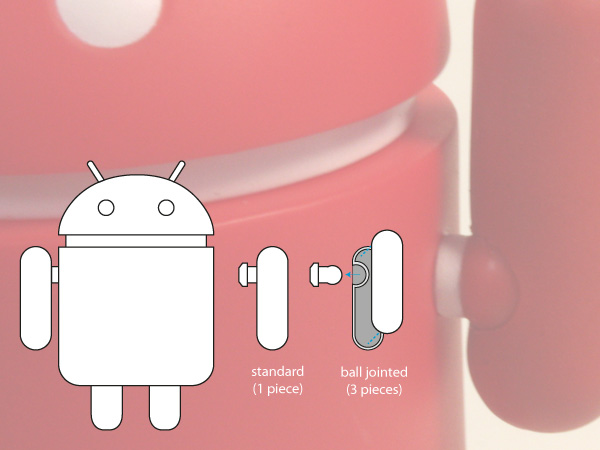 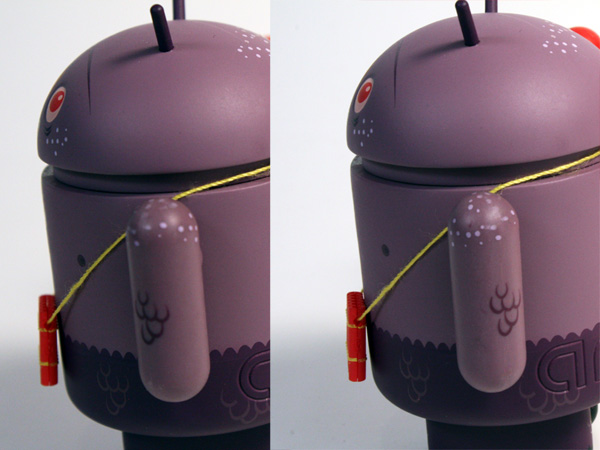 Wow it’s been a few months since I posted here! It doesn’t feel like it, because we’ve been hard at work behind the scenes since last year on the next designer series of Android mini collectibles! Originally we were aiming for a Q2 release, which would be before the end of this month…

The good news is that they’re better than ever, almost ready, and they look great! The bad news is that the improvements we’ve made equaled slightly longer prototyping manufacturing time. Despite things being pushed back a bit, I think everyone will be pleased with the results. We hope to have them all on a big ole boat by the end of the month and in your hands starting late July.

We’ll also have some more awesome Android news for you next week, so check back!
SDCC2012